Journey to a World Championship

This post may be a little bit late in the grand scheme of things – considering the subject matter took place about 2 months ago. But, I really wanted to wait until the dust settled, and the normality of life kicked back in before I shared my experience, and my side of the story regarding Shantelle Thompson’s 2015 IBJJF World Jiu Jitsu Championship win. 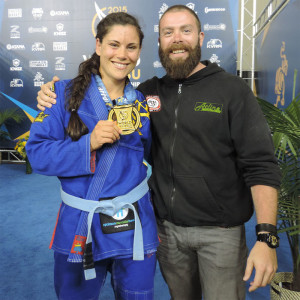 When I first met Shantelle at the 2014 Pan Pacific BJJ Championships, I had seen her fight a couple of times that day and thought to myself ‘I’d really love to work with this girl’ – she was obviously very naturally strong, and physically imposing on her opponents. We met while she was completely consumed in preparation for her next fight, all business, no breaking focus – if I had not have understood this, I’d have thought she snobbed me, but in fact that is just part of her pre-comp preparation, as little interaction as possible, total mental focus. She won 5 or 6 Gold medals at that tournament that very day. When finally the planets aligned, and she came to me looking for a strength and conditioning coach in January 2015, I could see there was a LOT more to her story than just a hungry fighter, gunning for a World Championship title. Shantelle is of Aboriginal heritage, and a mother of 3 very active children. She and her partner George devote a huge amount of their time to helping the indigenous community in their home town, Mildura. More specifically, at-risk indigenous youth and the stolen generation community. This immediately struck a chord with me, mainly due to my background working in Third-World Community development projects. Like I said to Shantelle on that day, ‘I have a good feeling about this’. My girlfriend Teresa and I decided to sponsor both Shantelle and George, not only for their endeavours in Brazilian Jiu Jitsu, but for their mission to empower and nurture the indigenous youth and stolen generation. As it happened, the best way we could help Shantelle and George achieve all their goals in their community, was to help them achieve the highest results possible in their sport – my strength & conditioning coaching, and Teresa’s masterful Myotherapy skills. Our sponsorship arrangement has proven to be mutually beneficial to this day. As Shantelle’s & George’s training with me gathered momentum through the early months of 2015, the words to describe Shantelle’s mental space are: stone-cold focussed, willing to make the sacrifices, embracing the small amount of compromise her and her family would have to endure in order to accomplish the massive task at-hand. Meanwhile, George had just undergone surgery on his knee and was restricted to Upper Body strength training only. The words to describe George’s mental space during this time are: fully committed to the frustrating process of recovery, taking the little bit he could do to the NEXT LEVEL, and always portraying the most positive outlook on his situation (at least that’s what I saw!!). The 2015 IBJJF World Jiu Jitsu Championships took place in Long Beach, California, in late May just gone.
Teresa and I were fortunate enough to be there in the U.S. and support Shantelle during the lead up to the Championships – I was also very humbled that Shantelle asked me to help work in her corner during her fights. The fights themselves were extremely exciting (I nearly had a heart attack at one point there, I’m sure), and every opponent presented a different set of challenges. Shantelle won 5 out of her 6 fights, walking away with the Gold medal in her weight division, and the Bronze medal in the ‘absolute’ or open-weight division. I could not have hoped to work with anyone more grateful, appreciative, dedicated, determined, focussed, positive, and committed to learning throughout the processes than these two. Both George and Shantelle have achieved such incredible results on the gym floor, simply because they wanted it more than the next person. Obviously the proof of this in the pudding, Shantelle came out of the whole thing with a World Championship Gold Medal (and Bronze) around her neck, and George has become absolutely ridiculously strong (even more scary than before) and started competing in BJJ competitions again. He just won the Silver Medal at the Jiu Jitsu World League in California this week.

For me, as a result of Shantelle’s World Championship Gold, I was fortunate enough to be awarded P.I.C.P. Level 5 Strength and Conditioning Specialist Certification by the Poliquin Group. This particular certification is only officially awarded to strength and conditioning coaches who can verify that they have coached an Olympic Gold Medalist or a World Champion in a recognised sport (IBJJF World Champions are indeed recognised by the Poliquin Group). I am now proudly one of only 5 people in Australia to hold this level of certification. So, there is a happy ending to this particular chapter – but this is definitely not the end of this story. Shantelle, George, Teresa and I still have a long journey ahead of us with so many amazing things left to achieve along the way! Macgregor McNair. 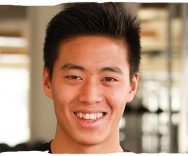